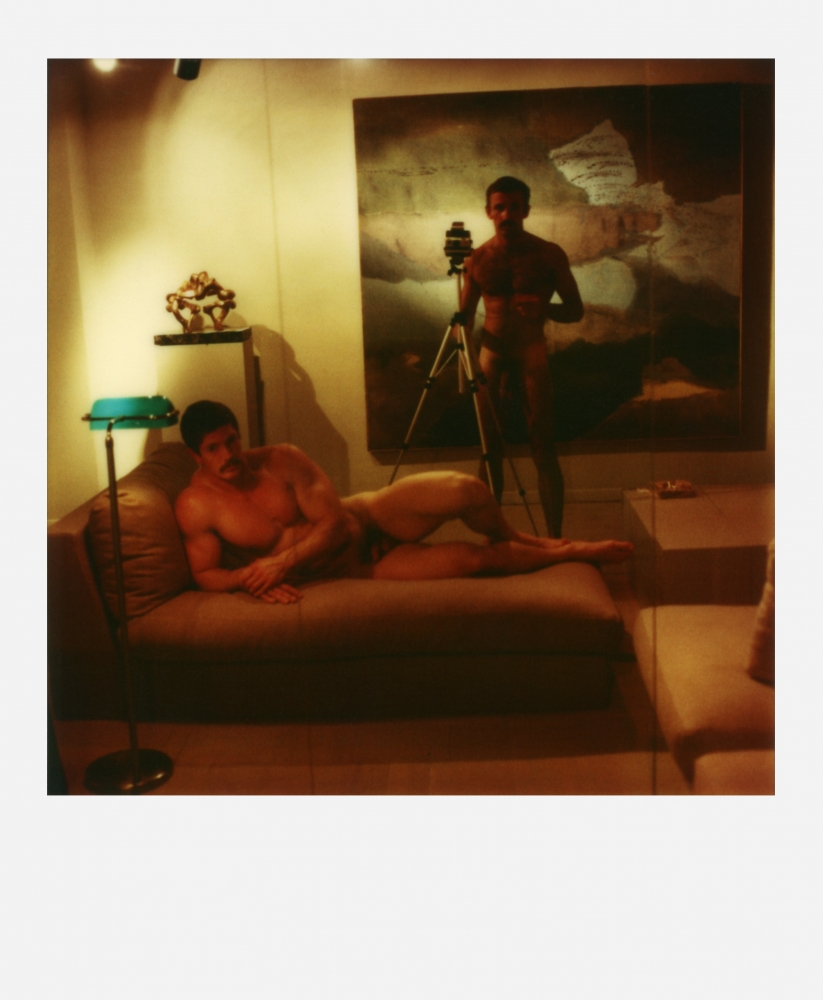 There should be a rule that for a selfie to merit existence it must come accompanied by a good story. Call it the Rule of Tom Bianchi. In one of the many self-portraits that appear in the 73-year-old artist’s new monograph, 63 E 9th Street: NYC Polaroids 1975–1983, a young Bianchi poses in front of a mounted camera as he stares into a mirror. The story behind that particular photo is that the camera was a gift from his former employer at Columbia Pictures, where Bianchi served as a corporate lawyer before quitting to become an artist. His bosses assured him that he could always return if his new career didn’t pan out. Not long after the photo was taken, Bianchi tore his law degree into squares and incorporated the pieces into a large collage titled ESQ—Notes from a Lawyer who Left.

Then there are the six selfies of Bianchi reclining on a pile of vintage physique posing-strap magazines, penis in hand. That series was taken at his former residence in Greenwich Village, an ultra-sleek utopia of his own making punctuated by his own artwork and modern furniture custom-built for him by friends and lovers. “It was amazing coming from a culture of ‘No, you can’t do that,’” he says, “to the gay world of ‘Oh, yes, you can.’”

At the time, Bianchi figured that his photos were too risqué for publication. They were “study materials” of the male physique taken during the same period as his Fire Island Pines series, which ultimately made him a recognizable name in the world of photography. His subjects are friends, flings, one-night stands—but mostly lovers, each a character in a different story, even if Bianchi can’t always put a name to the chiseled, nude body lying across from him in bed or captured in the mirror suspended above them.

But more than a few he does remember. There’s John, a boy he met on the street who painted Bianchi’s apartment in the nude over the course of several months. There’s Joey, with whom Bianchi was “head over heels in love” for a spell in the late ’70s. And there’s Harold, a “bright spirit” who found Bianchi under the “dark cloud” of AIDS in the 1980s. “You can be sad tomorrow,” Harold once told Bianchi right after he’d learned of a friend’s imminent death. “But tonight you’re going dancing with me.”

Today, Bianchi lives in an art-strewn home in Palm Springs with his husband, Ben Smales, far from the one-bedroom Manhattan apartment where he documented all of that love and loss. In retrospect, Bianchi thinks that everything he’s ever made has been a “challenge to homophobia.” That’s the utopia he wants to pass on in his photos’ soft-focus ecstasy to the kids scrolling Tumblr and the teens playing with similar forms of self-expression on Instagram. “It was,” he says, “a way of healing what we had experienced in our lives. It was also a way of having fun sex.”