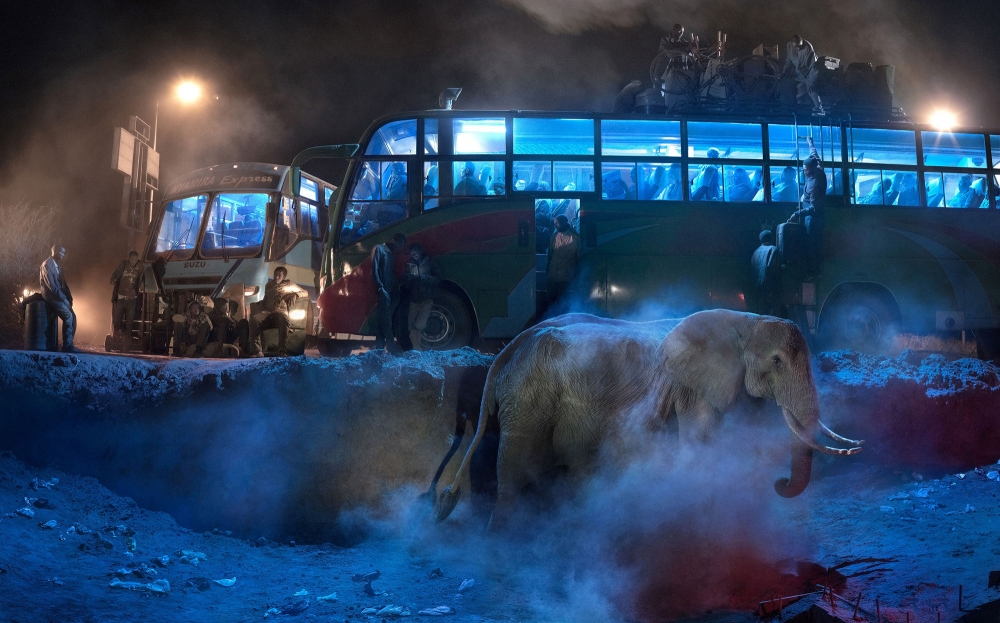 J.G. Ballard, arch-connoisseur of shifting ontologies, remarked more than once how he came to see reality as ‘a stage set … that could be dismantled overnight’. If reality can be dismantled, it can also be constructed and this is what Nick Brandt accomplishes in his latest project, as seen in the splendid book of that title, This Empty World, published by Thames & Hudson.  The photographs are composites of two scenes occupying the same physical space – a small area of Maasai land in Kenya – but ones which never existed at the same moment in time.

The work followed three stages, beginning with the rigging up of pre-set cameras and lighting in a designated spot where animals might be expected to visit. The site is left unattended but wildlife entering the frame of the cameras are captured on film. The second stage is the erection of a stage set, utilising space around the site and featuring, for instance, an artificial gas station, highway construction or bus depot. Then, to complete the scene, people are hired to take up positions relevant to the nature of the site – construction workers, say, or passengers around a bus station. A photograph from this third stage is then combined with one from the first stage. The final results are hugely dramatic and emotional mis-en-scènes that ask what is to be done in a world where humans and animals now have to share earth’s space and resources.

This Empty World is a logical development of his earlier black-and-white project, as seen to impressive effect in Inherit the Dust, published by Edwynn Houk Editions. Brandt photographed his own staged installations, ones created by positioning panels depicting life-size images of wildlife in African locations which once constituted the animals’ territory. Brandt’s ecological message was explicit: ‘Keep going at this pace, and the unique megafauna of Africa will be rapidly gone the way of the megafauna of America and Europe’.

Brandt’s phantasmagorias in a Kenyan landscape reveal a truth hidden by quotidian reality. The ordinary Africans that populate Brandt’s pictures are seen to be as much victims of modernity as the animals that inhabit the land now shared with them.