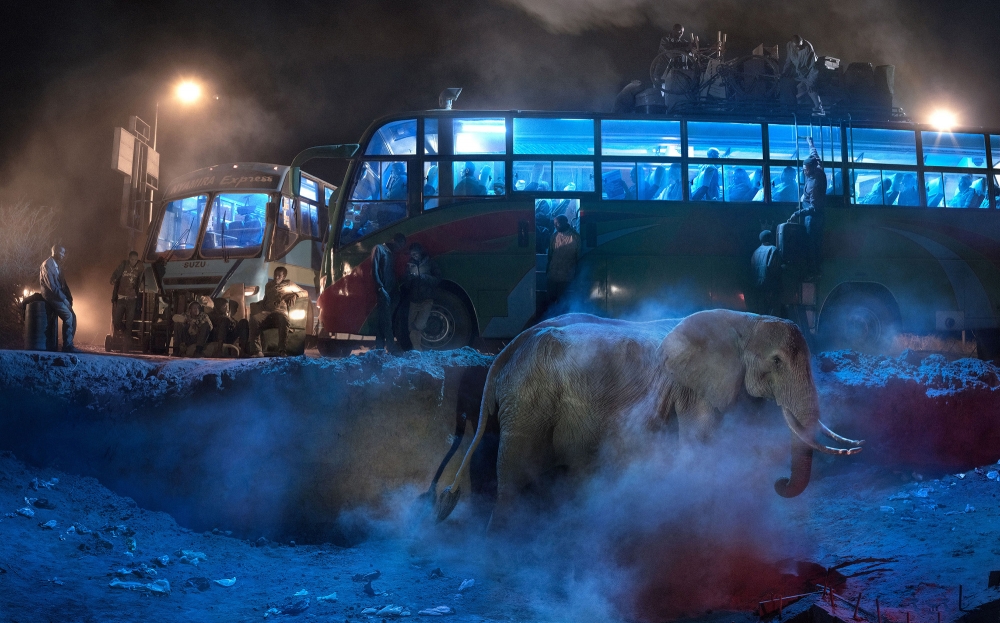 In Nick Brandt’s new book, This Empty World (Thames & Hudson), he explores the relationship between animals and humans that increasingly find themselves in one another’s way.

“There is a very finite amount of space,” Brandt tells Mother Jones. “There isn’t room for both humans and animals in places like East Africa.”

Brandt turned his eye on East Africa because, he says, he was “deeply moved in a way that I had never been before by the multiple species roaming pieces of land all at the same time.

On an early trip to East Africa, Brandt found himself taken with the landscape and the animals in it. “There’s something incredibly moving about seeing these visions of multiple species all spread out throughout this vista.” The landscape of East Africa is rapidly changing though as construction projects reach deeper into the vista that left such an impression on Brandt.

The work in this book was photographed on unprotected, inhabited Maasai ranch land in Kenya. Each photo is a carefully constructed composite. Brandt set up cameras to first capture the animals, a time-consuming process that involved waiting for the animals to wander into the area. Then, once the image of the animal had been captured, Brandt locked the camera in position, built elaborate sets, brought in locals and made new images to layer over the wildlife photo. At the end of each shoot, the materials were all recycled, and the lands were returned to their original condition.

Compared with his earlier work, where Brandt photographed animals in an epic, black-and-white glory, here he aimed to make it feel as if the animals were being swallowed by the earth, like human progress was sweeping over them. He used harsh, human lighting to illuminate the scenes, like the blue fluorescents common on East African busses and blistering yellow work lights, which furthers the feeling of intrusion.

The resulting images convey just how much the rising population and subsequent construction is encroaching on roaming lands. Of course, a decline in unobstructed, open space is only one of many challenges facing the elephants, giraffes, and other animals of Africa.

Brandt’s focus on environmental destruction is driven by an “absolute sense of urgency.” “Humankind is sleepwalking its way towards oblivion,” he tells Mother Jones. “I am perpetually perplexed. This should be on the front-page news, all the time, in every publication. And why, especially in America, are people in such denial?”

In the images, Brandt strives for a sense of shared empathy. It’s a deliberate attempt to make viewers feel animals and people are in this mess together.

Brandt is adamant that the prints must be viewed either at one of his exhibits or in his book to have their full effect, and he says the expressions on the faces of the human subjects are as important as those of the animals. “Looking at these on a computer, you may be fooled into thinking the people are the aggressors,” says Brandt.

“When you actually see the large prints, you see the faces and you see these people are also victims. They, as the rural poor, are also the victims of the environment’s degradation and destruction. In some of the photographs, there’s a kind of shared empathy.” Brandt says, “You will see photographs where the people and the animals’ expressions on their faces are really quite similar. And that is deliberate.”