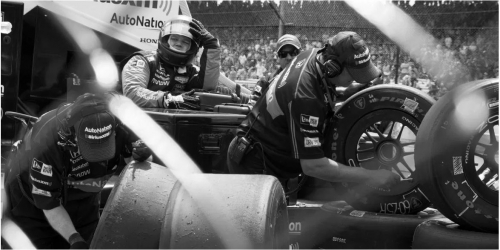 While Indy500 is still five months away, you can bet your ass that preparations are already under way for next season of Indy Car racing, and the world’s biggest and baddest car race. No rest for the weary, as they say. PATTERN’s participation in the annual tradition with all its accompanying fanfare during May has grown year by year. From helping celebrate and document race-inspired fashions at REV and hatching 500 Fashion Fridays campaigns, to taking our interns to the track for a scavenger hunt, to attending the race itself, we can’t wait for May! The fact that it’s the only event in Indianapolis to which actual, legitimate celebrities ever deign to show up is also a nice perk. Nothing better than hanging out on the red carpet and doing a live feed of the likes of Matt Damon, Christian Bale, Kelly Clarkson and Chris Hemsworth sauntering by within easy reach. But we digress. There is, in fact something better than ogling celebrities on the red carpet and that is bringing a bonafide legend into town to give them their first taste of Indy500. And we did just that! We invited OG photographer Janette Beckman to capture Indy500 in her inimitable way, and writer Richard McCoy to spend the day with her documenting the entire thing! Looks like they had fun!  – Editors

On Saturday, hours before the start of the 500 Festival Parade, Janette Beckman says to me, “let’s go in that,” and she strides across Pennsylvania Street. Her jet black hair is held in place by sunglasses as she moves straight into it. In this case, the “it” is a group of about 30 Indianapolis Police officers who are clustered together from some kind of pre-parade meeting. They’re wearing their blue uniforms with bullet proof vests and pistols on
their belts. The meeting is just breaking up and Janette has her Fuji XT2 camera in hand as she cuts right through the group, scanning the faces. What is she looking for? What is she seeing? I don’t think that officer likes that she’s doing this.

I trail directly behind her, carrying her bag and not sure, really, what I’m doing or what’s going to happen next. I’m nervous cutting through a group like this … I usually just try to get out of the way. She doesn’t take many photos, and kind of shrugs when we make it through them. Nothing that interesting in there, but we’re just beginning.

I offered to be Beckman’s assistant for the weekend as she explored Indianapolis during 500 weekend, which contains so many events and people that in memory it blurs and rings in my mind as a kind of monolithic smear of an image. It all seems to happen so, uh, fast, and the main stories we end up  remembering are: who won, and who wrecked. But I believe the most interesting part of the whole month is everything around the race, and not the race itself.

Born in England, she’s a photographer that makes portraits, and while she can do it in a studio,or out in the streets, she can also do it on the move. She’s shot album covers for some of the  world’s best artists, documented rebels and outlaws, and worked for iconic fashion brands — she’s been doing this since the late 1970s. Her photographs are widely collected and exhibited. But she doesn’t let her past or career impose on a moment; the past doesn’t matter. She is, instead, in this moment, here in Indianapolis. She’s quick with a laugh that disarms, and genuinely interested in people. She says that she came here to experience this particular kind of Americana.

We leave the Police officers and walk the streets before the parade starts, but it’s too early in the morning, and there’s no action here. The trucks are lined up along Pennsylvania, ready to pull the floats. A man has nodded off to sleep in one, the FM radio playing through the open window. Let’s go to the track.

For the entire month of May the campgrounds around the track are filled with people, r.v.s, tents, and beer. Lots of beer, and usually some mud. Janette has her arm out the window, as we slowly cruise the Coke Lot. She sees someone interesting, and I stop. She jumps out of the car to meet someone and take their picture. I keep the motor running. We cruise the entire lot like this as she does it again and again. As soon as a real camera appears, not just some phone camera, but a real looking camera, people just get ready and pose. It’s a magical thing.

Sometimes she makes a portrait, asking people for permission and arranging them in the morning light, other times she sees someone and quickly snaps a photo. Everyone is fair game at a public event like this. After a particular good experience she comes back to the car happy and checking the little viewer on her camera to see if she got the shot.

Sometimes people want to know who she’s working for, but most just have fun with it. We never write down a name. Nearly everyone says yes to her requests, because she’s nice. And she’s interesting … maybe it’s her British accent, maybe it’s how she moves around the shot and lines it up. She asks smart questions and quickly gets to know folks. She looks in their eyes and explores their faces. It’s close and intimate, and it just takes a moment.

Inside the track we head to the paddock and watch the race teams tinkering with their cars and equipment. The drivers and crew are meeting fans and sponsors, or pacing around. Author John Green said Race Day is like his Christmas Day. It comes once a year, and this is Race Day Eve. The energy is getting so high you can feel it. The sun is out, the sky cloudless and blue. It’s spring in Indiana and we’re all glad to see the landscape so green again.

Beckman and I walk the infield and figure out where we are going the next day. We discuss the crowd, that it’s almost all white people. She’s just arrived from New York, and it feels strange to be in such a singular culture. There are a lot of white people at the track … like 250,000 of them. We all know this. But I’m  seeing track culture through Beckman’s fresh eyes.

After a while she heads back downtown to document the 500 Festival Parade. She doesn’t define a route or a strategy. She tries to find the moment, and stay in it.

The next day we meet early and work through all of the pre-race events. With our media passes we can get behind the scenes and into interesting places. Beckman seems happiest documenting what is happening “back stage” rather than what is being presented on the stage. She’s more fascinated by the cars being worked on in the back lot by the mechanics, it seems, than the race itself -all of the racing stuff has been shot a 1,000 ways, and by 10,000 photographers. She loves to see the crews crawling all over these amazing machines checking everything.

We look at the Purdue Marching Band, the 500 Festival Princesses, the groups of friends and family coming in together. We get up close and personal with the five historic Cummins diesel race cars that make parade laps with legendary drivers. There’s Lyn St. James, Willie T. Ribbs, and Tony Stewart. She knows who Mario Andretti is, but I point out the rest. It’s amazing.

It’s a very special day for everyone — from the first timers to those that have a well-worn routine that they’ve been doing with their families and friends for decades. There’s a salute to the Indiana National Guardsman; it’s beautiful and touching, we agree. But it seems like every single guardsman is white.

We watch the drivers come out of the Pagoda and stand there with their families, waiting to be introduced on stage. The drivers are solemn, saying goodbye to their loved ones. Driver Ed Carpenter holds his son’s hand and it’s not hard to imagine what he’s thinking. You can see it on his face. Drivers get badly hurt here.

Janette takes more photos trying to capture the emotion of the pre race. It’s intense standing there so close to the drivers, with all the noise and energy of the marching bands and the cheerleaders. It’s a real ‘Americana experience’ for her. Everyone so proud of their country and excited for the race.

The race cars roar to life and the vibe at the track changes. I take Beckman to my favorite spot to watch the parade lap of the 33 cars going three wide down the front straight away. Hundreds of thousands of people stand and cheer; it’s the closest thing I’ve ever felt to being in a movie. Beckman snaps a few shots of this, I record it as a video on my phone. I love being in it.

The race rolls and we head out to the Snake Pit to hear the EDM concert which is being headlined by Skrilex. It’s a big deal, but doesn’t have anything to do with the race, and no one there really cares about the race. Again, Janette goes straight into it, while I would prefer to go find the back corner and observe how it’s all happening, who’s doing what. I’m cautious and she’s fearless. It’s probably because I’m much taller than her, but she’s able to weave and bob through the crowd to get right in front of the moment. I plod through, not sure if I should say excuse me to everyone I cross. Security guards are marching some guy out in handcuffs, and I step out of their way. She races ahead and stands in front of them to take the shot.

By now people are asking her to take their picture; groups of friends posing and modeling for her. A man wants his picture taken with his friends and his special shirt that says “Indiana as Fuck.” I’m right behind her when she’s taking the photo. It looks amazing in person, and she’s excited the moment they turn away. She thinks she has something special with this shot.

A few days later she sends me a link to the images. She made them all black and white. I love their stillness, I can see more in them. In the expanse of the weekend, the expanse contained within the 2.5 mile oval, and all of the city it’s hard to really see particular things. In her pictures the landscape is clarified and I can see the state’s signature cultural event.