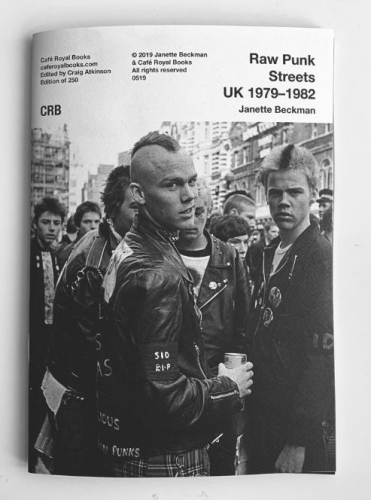 In the age of remix culture, it’s hard to remember when things originated, where movements started, and what true life even looked like before everyone had a camera and started looking mostly at themselves. When exactly did people start wearing leather jackets and letting their hair grow long? When did mods become punks and punks become new romantics and everyone else in the UK become the characters in Love Actually? And overtime, the lines get blurred and we start to think of cultural time periods as stereotypes—only as we see them represented on TV and in movies. Think the hippies in Dazed and Confused or the greasers in Grease for that matter. Which is why, as time goes on and styles start to become merely faded photocopies of their gritty originals, it becomes even more important to stop time for a little bit by, you guessed it, making a ‘zine.

This is part of the reason why Craig Atkinson created Café Royal Books, that is, besides a true devotion to the importance of documentary photography. He founded Café Royal in 2005 with the goal to create an archive of British documentary photography. Roughly 70 titles are published each year, with a small edition ‘archive box’ every 100th title. The ‘zines are printed on paper in black and white and are 14cm by 20cm and usually sell for 6 pounds, which is around 8 US dollars, give or take. “Café Royal was a kind of way of getting my and other artists’ work out into the world without a having to have a gallery. It was about getting work out in a more democratic way, rather than expecting people to go to the gallery to see the work and work that might not get into a gallery anyway. I wanted the work to be out there, for people to have access to it in public spaces.” Craig told us.

The Café Royal ‘zines are filled with photography documenting moments found over the years and all over the streets of the U.K. serving as sort of societal evidence for us to reference. As Craig explained, “Street photography is in my opinion overused at the moment. Street photography is always artistic, but it’s kind of an overused cool term at the moment. For me, the work becomes more interesting after say five or ten years. I think photographs of now go disregarded a little bit because we’re living it so we don’t need a photograph to show it. We see it anyway. Whereas in ten years time, we might look back at photographs of today and maybe understand today differently with hindsight.”

This proves they aren’t just ‘zines, they’re historical artifacts of how things actually were during those specific times. “What I publish really is about 1960 to 2000. The latter half of the 20th century. And within that you get industry, you get punk culture, you get club culture, you get whatever else it might be in sort of northern working class and London culture. It’s more just gathering pictures taken from that time so sociologists might come and look at it or fashion designers might come and look at it from that point of view. Or a geographer might come and look at it. I don’t really make them for photographers, although probably the largest audiences of the books are photographers. I get emails quite frequently from people with how they use the books. Playwrights and costume designers telling me how they use the books as sort of references. So they’re not just about industry or being British really, they’re just about showing a visual history of that time.”

We need these cultural artifacts to set the record straight. And these pictures were taken by the photographers who were truly there, photographers like Janette Beckman, who is releasing her first Café Royal book.

“When Craig reached out to me I looked at some of the books he done and I thought “this is so up my alley” because in a way the concept itself is kind of punk,” Janette said. “So many of the pictures in the book are unseen, I’d never printed them! London was very mixed. The punk, ska and the reggae scenes were mixing - even the Clash were using those sounds. I really wanted this book to show that there weren’t just white people —the cultures were very mixed, and there were many different styles. I love these pictures of these kids because it tells such a story about London at the time. I think people will really like this edition and then next one we will do is Mods and Rockabillies, and then two more over the next year.”

‘Zines document contemporary culture and do it from a specific point of view, from the people who were experiencing it and were part of it. People can look back at these ‘zines and understand how the clothes were, how the attitudes were, and who was part of the subcultures that we continue to appropriate. The documentary photography shown in Stephen McCoy’s “Housing Estates” ‘zines show the working class in their own way actually had a lot of class. Janette’s ‘zine “Raw Punk Streets UK 1979-1982” reveals that the kids were alright, and that they actually were just kids. Ian Beesley’s “Football Fans” ‘zine shows the supporters devotion has always ran that deep. It becomes historical fact, which is why it’s so important to keep the DIY nature of them alive.

And that’s what Craig believes, too. “As long as these galleries and libraries take copies, which they do, then I’m confident that they’re publicly accessible and they’ll be like that for times to come. That’s the main thing really. It’s great when individuals buy them, obviously. But I want them to be there forever. I want the work to be seen.” Rock on.