The Fahey/Klein Gallery is pleased to present a 50-year Retrospective on the photographs of Los Angeles based photographer William Claxton. This exhibition contains over 75 images, which highlights his photographic work in Jazz, Hollywood, Fashion and the early L.A. Art Scene, including well known and never before seen images.

William Claxton is primarily known as the leading photographer of the early California jazz scene. His unique and sensual images of Chet Baker (called the "James Dean of Jazz"), from 1952 to 1957, have become icons in the world of jazz photography. "Jazz", one of Claxton's first books, "is perhaps the first art photography book devoted to jazz musicians. By turns exuberant, joyful, and contemplative, Claxton's keen, intuitive photographs capture the nuances of the intimacy between jazz musicians and their music."("Jazz", Chronicle Books) "What's fascinating," Claxton says, "is the way they look when they're not playing, in other aspects of their lives - practicing, rehearsing, smoking, standing around talking, even eating and using dope. I guess you could say I listen with my eyes."

Claxton has said, "Photography is jazz for the eye. Just as jazz is the music or art of the moment - it is spontaneous and just occurs instantaneously - so is photography. Like recorded jazz, photography is a technical process which tries to capture and reproduce a feeling or experience that can be relived years later." (GQ, Conversation with Philip Watson, 1998)

Since the early 1950's William Claxton has been photographing numerous actors, directors, writers, artists and entertainers in the world of Hollywood, which appear in his recent publication, "Photographic Memory"(Powerhouse Books, 2002). In the introduction, Graydon Carter, refers to this book as having "the comfy intimacy and weekend pace of an extended-family album…Turn to any spread of this book and you are struck by Claxton's sense of freedom and ease; his pictures, almost without exception, are lithe and full of life…Claxton's intent seems not to glamorize but to linger, long and inquisitively, with a mind as open and forgiving as his aperture. Sheer likeability is one of his assets…Open your senses to William Claxton's world. Each picture in 'Photographic Memory' seems to have been made with the cool, breezy ease of a Paul Desmond solo."

In the early 1960's, Claxton began photographing his friend Steve McQueen. Over a six-year period he made numerous images of this iconoclastic Hollywood legend. He "captured on film not only McQueen's talent and perfectionism, but also his tender, sensitive side, and his puckish humor. The actor rarely revealed his most appealing characteristics publicly, but did so in the presence of his close friend." ("Steve McQueen", Arena Editions)

Claxton also photographed fashion and a myriad of models of the era, most notably his wife Peggy Moffitt, who was the chief model and muse of fashion designer Rudi Gernreich. "One of the most original, prophetic, and controversial American designers of the 1950s, '60s, and '70s, Rudi Gernreich was fashion's bad boy and it's oracle. The creator of the topless swimsuit and the thong, the see-through shirt and the "uni-sex" look, he infused Seventh Avenue with wit, intellect, and the beauty of surprise." William Claxton documented every Gernreich collection from 1962 on.

In the 1960's the New York art scene was winding down and suddenly Los Angeles was producing terrific artists, most of which William Claxton aimed his camera. The artists, such as Ed Ruscha, John Altoon, Ed Kienholz and Ed Moses were photographed enjoying their California youth, bouncing between friend's studios, art openings, and parties.

William Claxton began photographing jazz musicians while he was a student at UCLA. He went on to help form the Pacific Jazz Record label company where he photographed and designed all the company's early album covers. His award winning work has appeared on album covers for virtually all the major record companies. Claxton's photographs of jazz, Hollywood, fashion have appeared in numerous publications including Life, Time, Newsweek, Harper's Bazaar, Vogue, Playboy, and Paris Match. In 1967, he directed and produced the acclaimed fashion film "Basic Black." 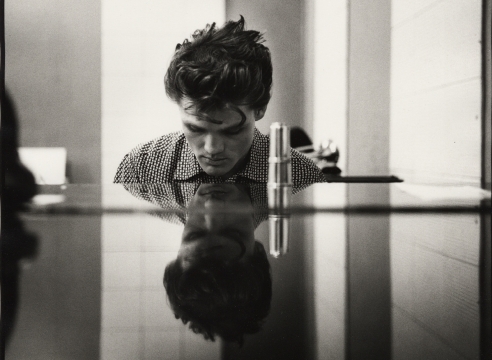