The Fahey/Klein Gallery is pleased to present Photographs from Shelby Lee Adams in his second Los Angeles exhibition. Adams has been recording the people and places in Appalachia since 1974. Each year, he returns to his home state of Kentucky to photograph the spectrum of distinctive individuals inside and outside their varied homes. His tender and honest portraits succeed in challenging and enriching an outsider’s perception of Appalachia.

Shelby Lee Adams is certainly influenced by the historic tradition of documentary photographers including, but not limited to, Dorthea Lange and Walker Evans. Within this documentary process, Adams introduces a personal element with each photograph. His subjects are familiar to him— they are comprised of friends and acquaintances from the close-knit communities in Appalachia.

In the introduction to his 2003 publication, Appalachian Lives, art critic Vicki Goldberg explains that Adams’ “care and respect shines through in the sympathetic nature of most of his pictures once allowance is made for his refusal to shy away from the facts of his subject’s lives…His photographs are at once intimate and distant, sympathetic and severe, respectful but tough, full of light and dogged by darkness, highly stylized yet capable of surprising candor.”

“Adams looks at a difficult subject with an artist’s eye. At their best, the complicated and ambiguous pictures in this book are an uncommon blend of humanity, reportage, and art, an Appalachia most of us thought we knew seen through the eyes that tell us that maybe we didn’t know it so well after all.” (Vicki Goldberg, Appalachian Lives)

Adams states of his own approach to photographing his subjects, “Although I am working within a single culture, a culture in transition, I am also collaborating with unique individuals, families, and communities. I must know, understand, and be accepted by a range of people. Often these relationships have developed over a period of years, so that, before I make my photograph, I have established a strong rapport with my subjects. I sometimes visit without the intention of taking a picture, only to have the idea of a particular photograph emerge in the moment or later as I reflect on what I have observed. What makes my work unusual is that the hours of traveling and visiting are just as important as the photographs, which are expressions of my love for these people and this place.” (Appalachian Lives)

Shelby Lee Adams has been exhibited both nationally and internationally. His publications include Appalachian Portraits (1998), Appalachian Legacy (1998), and most recently Appalachian Lives (2003). In 1978 and 1992, Adams was awarded the National Endowment for the Arts Grant. 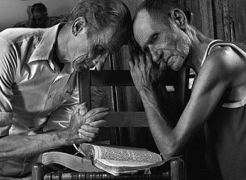