The Fahey/Klein Gallery is pleased to present an exhibition of photographs by Roger Ballen from his recent publication, “Boarding House” (Phaidon, 2009), as well as a selection of previously unseen images from Ballen’s latest series. These never-before seen images from an upcoming publication, revolve around birds in a strange and surreal world created by Ballen. Together, these two series form a complex psychological study, a bizarre and dreamlike photographic journey into Ballen’s psyche and the viewer’s subconscious.

Ballen’s photographic exploration of the people and land of South Africa began in 1982. Ballen’s earlier publications, “Dorps: Small Towns of South Africa” (Hirt and Carter, Cape Town, 1986), “Platteland, Images from Rural South Africa” (William Waterman Publications, 1994) document and explore rural South Africa and its inhabitants— disenfranchised and isolated whites struggling in transition after years of apartheid. Beginning with the later publication, “Outland” (Phaidon Press, 2001), Ballen started to depart from pure documentary photography, and began his transition to symbolic and metaphorical imagery. His 2005 publication, “Shadow Chamber” (Phaidon) blurred the lines between photography, sculpture, painting, and theater, featuring bizarre and mysterious images of people, animals, and objects occupying unsettling and strange rooms covered with scribbled drawings, abandoned objects, and dangling wires. This series of important publications established the fundamental elements of Ballen's work and set the tone for an evolving and increasingly complex body of work that comprises his latest book, “Boarding House”. “With this series, the sense of disjointedness that has been a part of Ballen's work for over a decade comes into full focus, delivering a sort of tarot card mash up with unlimited interpretive possibility.” (Eyemazing, “Boarding House”, 2009).

The series “Boarding House” was shot in a “three-storey warehouse structure near Johannesburg. Remote and hidden among huge tailings from gold mines, it is a neighborhood unto itself. Inside it is crowded with poor workers, transients, criminals hiding from the law, witchdoctors, pet animals, and insects. Only a few rooms are formed by walls, most of the spaces being partitioned off by rugs, blankets, or metal sheeting.” (David Travis, A Dwelling Within...“Boarding House”, Phaidon, 2009)

Although this strange place may in fact exist, it is Ballen’s images that transform the physical structure into a metaphorical and fictitious place, a chimera of shadows, cryptic shapes, inexplicable figures, disjointed body parts, and enigmatic drawings on the wall. The title itself “Boarding House” is “based on the concept of transience and temporary residence. “Boarding House” is the manifestation of [Ballen’s] unfettered imagination and is intended to find its way into the open places within the viewer's mind as well. Though Ballen maintains tight formal control of every visual element within the frame, he allows meaning to unfold in the realm of free association, so that details within and amongst his images inform each other in the creation of their own peculiar language. Whether the Boarding House is a real or imaginary place is both indecipherable and irrelevant. It is a place where Ballen's subconscious can occupy its own universe and nurture its own natural forces.” (Eyemazing, “Boarding House”, 2009).

“During the process of creating Boarding House, I broke through or into parts of my mind that I never knew existed. It was quite enthralling to find and be in this place. It is difficult to explain this place except that I think it exists in some way or another in most people’s minds” (Roger Ballen).

Roger Ballen was born in New York, 1950. His mother, an editor at Magnum, heavily influenced Ballen's interest in documentary photography. By the age of 18, he was photographing the civil rights and anti-war movement in the 1960’s. He went on to study psychology and received a Ph.D. in Mineral Economics. After traveling extensively, he settled in South Africa working as a geologist and mining entrepreneur in Johannesburg. It was in rural South Africa, that Ballen discovered the “dorps”, which he began to photograph and document. From 1982 to 1994, Ballen photographed these villages and their people, integrating his background in psychology into his work. When Ballen started work on the publication “Outland” in 1994, he began to photograph solely in Johannesburg, where he has worked and photographed ever since. Roger Ballen's work has been exhibited in galleries internationally, and has been widely collected by institutions such as the Museum of Modern Art, New York and the Victoria and Albert Museum, London. 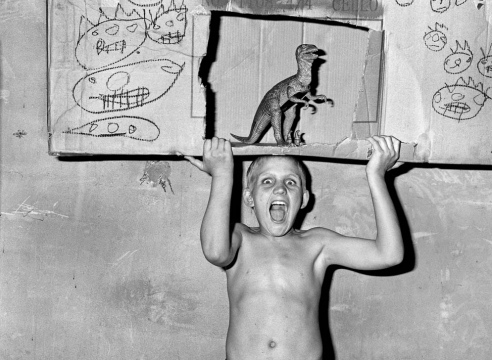