ROBERT COBURN
The Birds: Portrait of a Film

The Fahey/Klein Gallery is pleased to present a selection of photographs from Hollywood photographer Robert Coburn.  “The Birds”: A Portrait of a Film features set photographs and portraits from the classic 1963 Alfred Hitchcock thriller, “The Birds”.

Robert Coburn was one of the most influential portrait photographers working in the major Hollywood movie studios from the 1930’s to 1960’s.  His star subjects included Rita Hayworth, Joan Crawford, Kim Novak, Carole Lombard, William Holden, Glenn Ford, and Orson Welles.  Coburn’s most infamous portraits immortalized Hollywood’s greatest icons and helped to define this era as the Golden Age of Cinema.  In 1940, Robert Coburn began a twenty-year career with Columbia Pictures as the head of the still production department and the studio’s chief portrait photographer for many landmark films including “Picnic”, “Gilda”, and “The Big Heat”.

In 1963, Robert Coburn worked as still photographer on the set of Alfred Hitchcock’s film “The Birds”.  Based on a novelette by Daphne Maurier, starring Rod Taylor and Tippi Hedren, this classic thriller employed cutting edge film techniques to portray dizzying hordes of birds violently and inexplicably attacking the residents of a small coastal town.  Hitchcock enhanced the film’s unique look, by giving the moviegoer a bird’s eye view of unfolding scenes of terror and death.  His film disturbed audiences by turning delicate birds into swarming, senseless, menacing creatures attacking helpless victims for no apparent reason.  The film’s modern apocalyptic imagery of a world in violent chaos garnered the film an Academy Award nomination for visual effects, making the thriller an indisputable Hitchcock classic.

Robert Coburn’s still photographs from the set of “The Birds” capture the two sides of the filming of this iconic Hitchcock thriller.  His photographs from set effectively document the evolution of the movie making process while dramatically portraying the creation of chaotic scenes of victims fleeing the birds’ violent attacks.  The swirling mania and the onslaught of a senseless mass of birds hurtling themselves down an open chimney and into a claustrophobic living room illustrate elements of the surreal within this story.

Coburn made candid portraits of Hitchcock on the set, occasionally pictured with a wry grin, directing and joking with fellow crew members and actors.  A carefully coifed Tippi Hedren, with a wire birdcage on one knee, sits and smiles jovially at the end of the dock on location.  One of Robert Coburn’s most memorable publicity shots, used for the film, portrays a famously droll Hitchcock, balancing a large, menacing raven on one arm, while at the same time giving the ominous bird a stern, yet suspicious glare.

In both 1941 and 1943, Robert Coburn was awarded the Academy of Motion Pictures, Arts and Sciences’ Still Photography Exhibition Award. 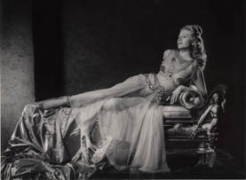