The Fahey/Klein Gallery is pleased to present the photographs of legendary photojournalist and Hollywood photographer Phil Stern. Stern has made images of iconic figures and emblematic events of our age, from World War II soldiers, luminous jazz legends and Hollywood environmental portraits. The exhibition accompanies the release of his new book A Life's Work by powerHouse books- a tribute to Phil Stern and his sixty-year career in photography.

Phil Stern, born in 1919, began his photography career in 1937 in New York City, working as a studio apprentice by day and as a photographer for the New York's Police Gazette by night. Shortly thereafter he was sent to Los Angeles by Friday magazine. There he began photographing in Hollywood and freelancing for Life, Look, and Colliers magazines. After a two-year stint as a combat photographer in World War II covering the invasions of North Africa and Sicily with the Darby Rangers, Stern returned to L.A., where he worked for a number of movie magazines. Stern also shot photographs for more that sixty album covers for a number of record labels, including Verve, Pablo, and Reprise Records. He photographed on the sets of over one hundred feature films, including The Magnificent Ambersons, The Alamo, West Side Story, and What Ever Happened to Baby Jane? (A Life's Work, powerHouse Books)

"Phil Stern - master photographer. Since the 1940's, his pioneering techniques and uncanny gift for stripping the masks off his iconographic subjects-John Wayne, Marlon Brando, Humpfrey Bogart, Marilyn Monroe, and Frank Sinatra, to name only a few - have established his legend. Phil helped to define the movie capital during its golden age; he brought America's celebrity culture into focus, and into our homes." (Patricia Bosworth, A Life's Work/powerHouse Books).

One of Stern's most memorable images is a close-up of James Dean peeking over the tattered neck of his black sweater. Stern describes his first meeting with Dean, "I was cruising west on Sunset Boulevard heading for Life magazine's photo lab…a crazy motorcyclist was driving through a red light. We were on a collision course. We both braked and careened through the intersection. I came close to killing him-just a few inches saved his life. I stuck my head out the window screaming profanities as he got off his bike with a dopey grin on his face. It was James Dean." (A Life's Work, powerHouse Books) The story continues with Stern and Dean having a two-hour breakfast then going to the set of Guys and Dolls where Stern had set up a shoot with Frank Sinatra and Marlon Brando. He would later take many photographs of the self-destructive Dean.

"If you're lucky enough to have captured maybe two hundred memorable pictures, you still haven't captured that much experience, have you?" Phil Stern says of his work. "There is no such thing as the perfect picture," he says. "That's the challenge of photography. I was always striving for perfection, even though I knew I could never achieve it. But it kept me reaching for something - you know what I mean?" (A Life's Work/powerHouse Books).

"…Phil, though by no means a scandalmonger, was extremely good at capturing the famous in subtle, unguarded moments - moments the public was most interested in." (Patricia Bosworth, A Life's Work/powerHouse Books).

"Of all of Phil's subjects in Hollywood, no one generated more attention, excitement, or controversy than Frank Sinatra. Sinatra - "The Voice" - the actor, the swinger, the drinker. Beloved by the Mafia. Beloved by politicians. He moved through Hollywood, Las Vegas, New York, and Europe always with a phalanx of bodyguards walking ahead of him. His powerful position in the performance industry was unmatched; he is considered by many to be the greatest entertainer of the twentieth century. Phil photographed Sinatra over the course of fifty years, starting in the mid 1940's when Sinatra was a frail kid with big ears and a face that has been described as looking like that of 'a debauched fawn.' I was never part of his inner circle,' Phil says, 'but for some reason Frank trusted me.'" (Patricia Bosworth, A Life's Work/powerHouse Books).

Stern was tapped by Sinatra to photograph the Kennedy inaugural. "There is a shot that seems to sum up the entire occasion: Sinatra sitting next to JFK at one of the noisy parties, tenderly lighting the new president's cigarettes. Their faces are blurred - out of focus, shadowed - but one can sense just how irresistible the attraction between power and glamour can be. In public's imagination, the association between Sinatra and Kennedy was almost mythic. These two profoundly charismatic men - with sometimes questionable morals - were the central emblems of America's "aristocracy," and they symbolize the union of politics and show business. Fame has a deep appeal - as does power, or the proximity to power. The supreme American fantasy is that the famous only mingle with the famous and all lines converge." (Patricia Bosworth, A Life's Work/powerHouse Books).

"There is a certain seamlessness in Phil's photography-in scenes, sequences, close-ups, long shots; everything flows together so smoothly that anyone is never aware of the mechanics of picture making. Sharpness, fluidity, contrast, improvisation - these elements became part of Phil's philosophy as a photographer. He has been greatly inspired by artists such as Rembrandt, Matisse, Daumier, and George Grosz." (Patricia Bosworth, A Life's Work/powerHouse Books).

In 2001, Stern donated his library of Hollywood images to the Academy of Motion Pictures Arts and Sciences. His previous publications include, Phil Stern's Hollywood (Knopf). Stern lives in Los Angeles. 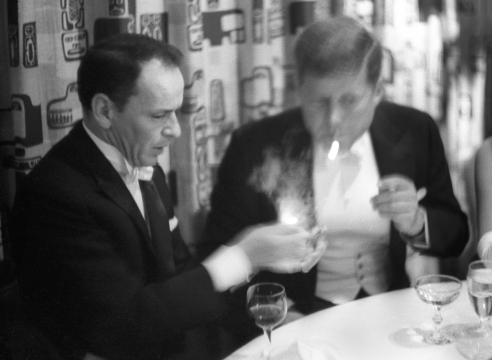