The Fahey/Klein Gallery is pleased to present a selection of new fine-art photographs by Mark Laita in conjunction with the release of his new book entitled Created Equal published by Steidl with an introductory essay by art writer and essayist, Ingrid Sischy.

Created Equal contains 210 American portraits which are presented as diptychs and available in three sizes including life-sized photographs. Each paired set of portraits compares or contrasts elements of its diverse range of subjects creating interesting, poignant or even humorous juxtapositions. Laita's portraits reconsider or reinforce our perception of American archetypes as they explore themes such as wealth, beauty, occupations, and age. Each single portrait enhances and challenges the definition of its counterpart. Our perceptions of types can be affected, or redefined, once we see the figures side by side.

The diptychs took Laita eight years and include subjects from each of the 48 contiguous states. All of the black and white images were made using a traveling "studio" with an 8x10 camera, a single light and a grey backdrop, which help maintain neutrality and consistency in the paired images.

Laita states: "In America, the chasm between rich and poor is growing, the clash between conservatives and liberals is strengthening, and even good and evil seem more polarized than ever before. At the heart of this collection of portraits is my desire to remind us that we were all equal, until our environment, circumstances, or fate molded and weathered us into whom we have become.

"Created Equal does not airbrush out the scars of life, the wrinkles, triple-chins, missing teeth, and other more extreme aberrations of so-called 'normal' standards. Apart from a few exceptions, what is obviously missing is the upscale view we have gotten so used to - the sense of money and power and glossied-up beauty - that has been such a staple of recent times..Laita's Created Equal is definitely a personal view. He says: 'I photograph what I love about my country, which is the American. By that I mean the individual who is shaped from more than 200 years of liberty and independence missed with all the successes and failures that America has experienced in its short life. So here is a collection of these creatures. Tragic and wonderful, great and ordinary, they stand proud and ready for scrutiny.'" (Ingrid Sischy, Created Equal).

Mark Laita grew up in the Midwest cities of Detroit and Chicago, where he discovered photography at the age of fifteen. As a teenager he worked on a series of portraits of Chicago's homeless, which thirty years later matured and expanded into Created Equal. He earned a degree in photography from Columbia College and the University of Illinois/Chicago. He divides his time between Los Angeles and New York City. 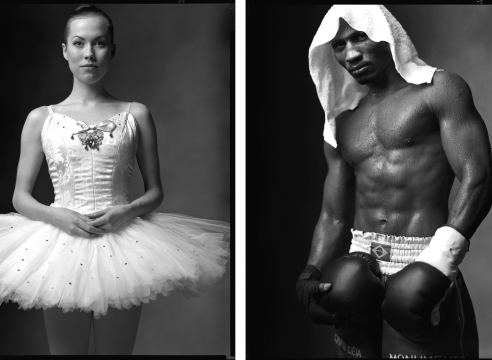