The Fahey/Klein Gallery is proud to present the photographs of the award-winning photojournalist James Nachtwey in his first one-person exhibition in Los Angeles. This exhibition is an overview of his sensitive and riveting photographs made under difficult conditions in various parts of the world including South Africa, Rwanda, Romania, Bosnia, Somalia, El Salvador, and Afghanistan. In the tradition of world-renowned photojournalists Robert Capa, W. Eugene Smith and Sebastio Salgado, Nachtwey has proven himself to be an equal, never forgetting, "…that at the heart of violence and chaos is human emotion." ("Deeds of War" From the introduction by Robert Stone)

Nachtwey understands the power of the universal language of photography to capture an image with meaning and to communicate the truth and essence of the moment. Like all artists/communicators, he is compiling historical records infused with his talents as a messenger producing images that transcend the written word. One might say that Nachtwey is doing with his photographs what Picasso did with his painting, "Guernica," expressing his outrage at what humanity brings upon itself.

"For me, the strength of photography lies in its ability to evoke a sense of humanity. If war is an attempt to negate humanity, then photography can be perceived as the opposite of war and if it is used well it can be a powerful ingredient in the antidote to war. In a way, if an individual assumes the risk of placing himself in the middle of a war in order to communicate to the rest of the world what is happening, he is trying to negotiate for peace. Perhaps that is the reason why those in charge of perpetuating a war do not like to have photographers around. It has occurred to me that if everyone could be there just once to see for themselves what white phosphorous does to the face of a child or what unspeakable pain is caused by the impact of a single bullet or how a jagged piece of shrapnel can rip someone's leg off - if everyone could be there to see for themselves the fear and the grief, just one time, then they would understand that nothing is worth letting things get to the point where that happens to even one person, let alone thousands." (James Nachtwey)

James Nachtwey is the subject of Christian Frei's documentary, "War Photographer," which was nominated for an Academy award in 2001. In a New York Times article on this film, the writer said of Nachtwey, "thin and soft-spoken, he has the manner of an ascetic who has subsumed all his ego and passion into his morally and physically demanding work. Following him into the field, we are at a double remove, witnesses, as if were, to his witnessing."

"Nachtwey observes, he must also remain an outsider, a sympathetic observer of what is happening to other people"…"This sympathy may be what distinguishes Mr. Nachtwey from many of his colleagues. He acknowledges that recording grief, injury, death, and distress is potentially a form of exploitation, but he makes it clear that the alternative - allowing man-made misery to remain invisible beyond the reach of those whose consciences should be shocked by it - is worse." (A. O. Scott, Witnessing the Witness: Looking Over a Shoulder at War's Deprivation, New York Times, June 19, 2002)

"Nachtwey's camera has a way of finding tragic elements in a world so brutalized that it ought to be beyond tragedy. Tragedy requires a certain nobility in its victims: seen in 'Deeds of War,' that nobility is poignant and collective. It is expressed in the pathetic artifacts of the everyday life to which so many of Nachtwey's subjects vainly aspire; in their grief; in hope itself, which appears as a tantalizing implicit presence in so many of the photographs." ("Deeds of War" From the introduction by Robert Stone)

"Since 1981, readers of such magazines as Time, National Geographic, and Live, have been aware of a restless and brilliant visual presence in their pages. For nearly a decade, James Nachtwey has stalked the terrifying existence of war and civil strife with his camera. Never content to simply record its explosive power, its gruesome ravaging of its victims, its confusion and disarray, Nachtwey has consistently managed to set all the dehumanizing elements of war in a human dimension." ("Deeds of War" From the introduction by Robert Stone)

James Nachtwey grew up in Massachusetts and graduated cum laude from Dartmouth College (1966-1970), where he studied art history and political science. Images from the Vietnam War and the American Civil Rights movement had a powerful effect on him and were instrumental in his decision to become a photographer. He has worked aboard ships in the Merchant Marine, and while teaching himself photography, he was an apprentice news film editor and a truck driver. In 1976, he started work as a newspaper photographer in New Mexico, and in 1980 moved to New York to begin a career as a freelance magazine photographer. His first foreign assignment was to cover civil strife in Northern Ireland in 1981 during the IRA hunger strike.

He has received numerous honors such as the Common Wealth Award, Robert Capa Gold Medal (five times), the World Press Photo Award (twice), Magazine photographer of the Year (six times), the International Center of Photography Infinity Award (three times), the Leica Award (twice), the Bayeaux Award for War Correspondents (twice), the Alfred Eisenstadt Award, the Canon Photo Essayist Award and the W. Eugene Smith Grant in Humanistic Photography. He is a fellow of the Royal Photographic Society and has an Honorary Doctorate of Fine Arts from the Massachusetts College of Art. 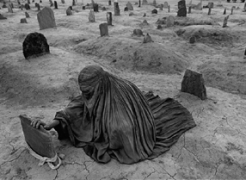