The Fahey/Klein Gallery is pleased to present the photographs of Geof Kern in his first Los Angeles exhibition. The exhibition features both color and black and white photographs taken throughout Kern’s career which beautifully demonstrate his ability to illustrate whimsical scenes with a cinematic aesthetic.

Praised by some of the most creative magazines and ad agencies today, Kern approaches photography with a distinct vision. “I began my career in the early 80’s when art and commercial photography were two different worlds entirely. Maybe because I didn’t know any better, I just started photographing what I wanted and people got excited about it. Word spread… I became known as a “surrealist” because there was no other word to describe what I was doing,” says Kern.

Kern’s multifaceted style combines photography and illustration and redefines the traditional photographic genres of fashion and still life. He uses fabricated sets and pseudo-suburban scenes to mock the mundane. Steering away from high profile models, Kern prefers neighbors, acquaintances, and locals to take stage in his fanciful constructed realities. His approach to the “everyday” and domestic subject matter is riddled with irony, imagination, and subtle humor.

In 1994 Kern was commissioned by Creative Director Georgia Christiansen, for the 30 page Neiman-Marcus Fall fashion spread, The Art of Fashion. This prestigious annual campaign was first shot by Richard Avedon, followed by Helmut Newton and Annie Leibovitz. Kern’s story depicts a girl who longs to become a famous fashion model, and scene by scene, slowly evolves into a stiff and lifeless mannequin. The controversial spread was later declared by Time Magazine as the “Best print campaign of 1995.”

One of the most sought after commercial photographers working today, Kern has an impressive resume decorated with prestigious clients, as well as numerous campaigns and awards. Shooting for Neiman-Marcus, Vanity Fair, New York Times, Harper’s Bazaar, Esquire, GQ, and Bloomingdales, Kern has become known for his stylized, surrealist narratives.

Kern received The Alfred Eisenstaedt Award for Magazine Photography from Columbia University (2000), as well as the prestigious Infinity Award in Applied Photography from The International Center Of Photography, New York (1993). In 2000 a selection of his work became part of the permanent collection of The Musée des Arts Décoratifs, Louvre, Paris. 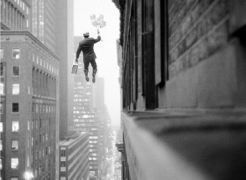