The Fahey/Klein Gallery is pleased to present the photography of Berenice Abbott and Julius Shulman. This exhibition features a selection of the most iconic photographs representing a visual chronology and history of modern architecture and development from both the East and West Coast regions. These photographs show both the personal and colossal influence of architecture as America developed its aesthetic sensibility through the mid-20th Century.

The North gallery focuses on a selection of photographs from Berenice Abbott's pivotal series, Changing New York. Featuring some of the most celebrated images of New York City during the late 1930's, Changing New York represents a seminal study of an emerging modern city by documenting the dichotomy between the wealthy and the poor as well as the old versus new constructions in the recently thriving City recovering from the Great Depression. As Abbott claimed, "In my own case with New York City - the contrasts, the fast changes inspired me. The look of vibrant city needs detail texture, perspective." Abbott's lens captured the moment New York City itself transforms from the port of the East Coast to the artistic and financial capital of the world.

In the South gallery, we are featuring the photographs of Julius Shulman. Capturing experimental and exploratory architecture as it seeks to discover the individual personalities that collectively make up the unique character of Southern California, Shulman's photographs show the development of several prominent architects, showcasing their unique and revolutionary contributions to the modern urban landscape. Featuring photographs of designs by Richard Neutra, John Lautner, and Pierre Koenig, Shulman's chronology focuses on the style, form, and utility that makes a space unique, illustrating the profound effect urban planning and design can have on the aesthetic sensibility of a city whether it is Los Angeles, Hollywood, Beverly Hills, Palm Springs among numerous others. In the process, he created some of the most iconic pictures of modern photography and ostensibly established interior architectural photography as an art form. 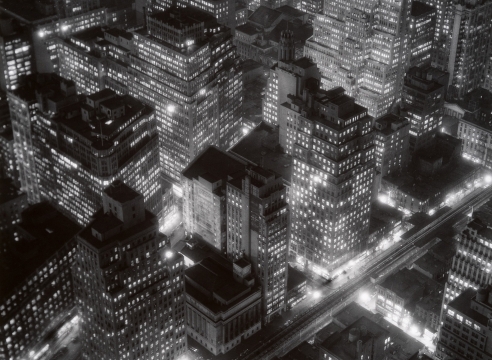