Connecting to the Infinite, 1986

The Sovereign Right of Self Discovery, 1983

Steven F. Arnold (1943-1994), an American artist and protégé of Salvador Dali, was a visionary filmmaker, photographer, painter, illustrator, set and costume designer, and assemblage artist. With a Surrealist’s eye for proliferating detail; he transformed his subjects, nearly all of them nudes, into gods and goddesses—winged, crowned, and levitating.

With a cheeky approach to myth and mystery, Steven Arnold was driven to find new modes of expression. From 1982 – 1989 Arnold designed and photographed tableau-vivants, and left thousands of living tableau photographs and negatives unpublished. This work is a synthesis of multiple art forms combining painting, assemblage sculpture, theatre, ballet, filmmaking, video, drawings, operas, and writings as a reflection of the culture. With absolute control within his studio environment, Arnold’s models become actors in the worlds he created. These Gods and Goddesses are tangible illusions because Arnold made them exist. Many of the figures are androgynous, in the act of self-realization, and shown at the moment of ultimate self-discovery. In an attempt to reach a universal audience, Steven Arnold uses an assemblage of collected symbologies. As a result, this body of work finds itself turning into reliquaries or shrines.

Arnold was diagnosed with AIDS in 1988, and succumbed to his illness in 1994.

Steven Arnold’s vast artistic catalog continues to be exhibited worldwide. He is the focus of a documentary, titled Heavenly Bodies, co-narrated by Anjelica Houston and Ellen Burstyn, scheduled for release in Summer 2019. 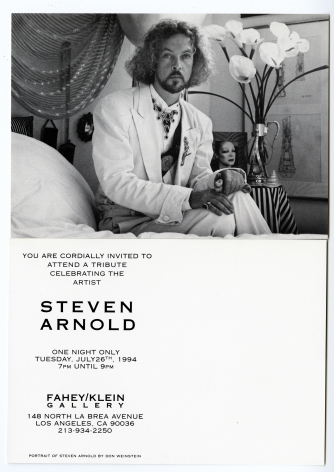