Since opening his studio in New York City in 1983, photographer Stephen Wilkes has built an unprecedented body of work and a reputation as one of America’s most iconic photographers, widely recognized for his fine art, editorial and commercial work.

His photographs are included in the collections of the George Eastman Museum, James A. Michener Art Museum, Houston Museum of Fine Arts, Dow Jones Collection, Carl & Marilynn Thoma Art Foundation, Jewish Museum of NY, Library of Congress, Snite Museum of Art, The Historic New Orleans Collection, Museum of the City of New York, 9/11 Memorial Museum and numerous private collections. His editorial work has appeared in, and on the covers of, leading publications such as the New York Times Magazine, Vanity Fair, Time, Fortune, National Geographic, Sports Illustrated, and many others.

Wilkes’ early career interpretations of Mainland China, California’s Highway One, and impressionistic “Burned Objects” set the tone for a series of career-defining projects that catapulted him to the top of the photographic landscape.

In 1998, a one-day assignment to the south side of Ellis Island led to a 5-year photographic study of the island’s long abandoned medical wards where immigrants were detained before they could enter America. Through his photographs and video, Wilkes helped secure $6 million toward the restoration of the south side of the island. A monograph based on the work, Ellis Island: Ghosts of Freedom, was published in 2006 and was named one of TIME magazine’s 5 Best Photography Books of the Year. The work was also featured on NPR and CBS Sunday Morning.

In 2000, Epson America commissioned Wilkes to create a millennial portrait of the United States, “America In Detail,” a 52-day odyssey that was exhibited in New York, Chicago, Los Angeles, and San Francisco.

Day to Night, Wilkes’ most defining project, began in 2009. These epic cityscapes and landscapes, portrayed from a fixed camera angle for up to 30 hours capture fleeting moments of humanity as light passes in front of his lens over the course of full day. Blending these images into a single photograph takes months to complete. Day to Night has been featured on CBS Sunday Morning as well as dozens of other prominent media outlets and, with a grant from the National Geographic Society, was recently extended to include America’s National Parks in celebration of their centennial anniversary and Bird Migration for the 2018 Year of the Bird.

Day to Night : In the Field with Stephen Wilkes opened at the The National Geographic Museum  in February, 2018. Day to Night will be published by TASCHEN as a monograph in 2018.

Wilkes’ work documenting the ravages of Hurricanes Katrina and Sandy has brought heightened awareness to the realities of global climate change. He was commissioned by the Annenberg Space for Photography to revisit New Orleans in 2013 after documenting Hurricane Katrina for the World Monuments Fund. And, his images were exhibited with his photographs on Hurricane Sandy in the 2014 Sink or Swim, Designing for a Sea of Change exhibition.

Wilkes was a speaker at the TED2016: Dream Conference on his Day to Night series. He is currently working on a documentary film about legendary photographer Jay Maisel’s historic Bank Building at 190 Bowery.  In 2017 Wilkes was commissioned by the US Embassy, Ottawa to create a Day to Night photograph of  Canada’s 150th anniversary of Confederation.

Wilkes’ extensive awards and honors include the Alfred Eisenstaedt Award for Magazine Photography, Photographer of the Year from Adweek Magazine, Fine Art Photographer of the Year 2004 Lucie Award, TIME Magazine Top 10 Photographs of 2012, Sony World Photography Professional Award 2012, Adobe Breakthrough Photography Award 2012 and Prix Pictet, Consumption 2014. His board affiliations include the Advisory Board of the S.I. Newhouse School of Communications; Save Ellis Island Board of Directors, on which he served for 5 years; and the Goldring Arts Journalism Board.

Wilkes was born in 1957 in New York. He received his BS in photography from Syracuse University  S.I. Newhouse School of Public Communications with a minor in business management from the Whitman School of Management in 1980.

Wilkes, lives and maintains his studio in Westport, CT. 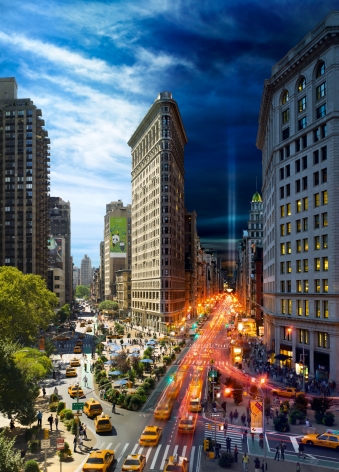