President Bill Clinton has called Herman Leonard, "The greatest jazz photographer in the history of the genre." Born March 6, 1923 and raised in Allentown, PA, at age 9, Herman Leonard witnessed an image being developed in his brother's darkroom and became enthralled with the magic of photography. As the official photographer for his high school, Herman quickly learned that with a camera in hand, he had an "open sesame" to people and events, that his shyness might have prevented him from experiencing. When it came time for college, Herman chose Ohio University, “The only university at the time that could offer me a degree in Photography”. His college studies were interrupted from 1943-1945, as Herman joined the United States Army and was sent to Burma with the 13th Mountain Medical Battalion. He had hoped to be a field photographer, but was ironically assigned as a combat anesthetist when he failed a test which required him to identify the chemical ingredients of film developer. After the war, Herman returned to college and graduated in 1947 with a Bachelor of Fine Arts Degree.

Herman's most influential teacher was master portrait photographer, Yousuf Karsh, with whom Herman spent a year as an apprentice to in Ottawa, Canada from 1947-1948. Herman assisted Karsh in the darkroom and with photographic sittings including, Martha Graham, Harry Truman, and Albert Einstein.

In 1948, Herman's passion for jazz brought him to New York City's Greenwich Village, where he set up a small studio at 220 Sullivan Street. He made his way into the swinging clubs of Broadway, 52nd Street and Harlem. With the camera as his free ticket, he offered to shoot publicity stills of the jazz artists for admission. While shooting at The Royal Roost and Birdland, he photographed and developed friendships with some of the greats of jazz history, including Miles Davis, Charlie Parker, Dizzy Gillespie, Lena Horne, Billie Holiday, Duke Ellington and many more. Many of his photos eventually ended up on the covers of jazz albums while working for producer Norman Granz, as well as in Downbeat and Metronome magazines.

In 1956 Leonard was chosen by Marlon Brando to be his personal photographer for an extensive research trip throughout the Far East. At the conclusion of the trip, Leonard had been bitten by the travel bug and headed for Paris, France. He continued to photograph the prolific jazz scene, with many of the American jazz artists now living there. Working for French recording label Barclay Records, he also photographed many French recording artists such as Charles Aznavour, Jacques Brel, Eddy Mitchell and Johnny Hallyday. He also became the European photographer for Playboy Magazine. Throughout the 1960’s and 70’s his work focused primarily on fashion and advertising at his studio in Paris’ chic Neuilly-sur-Seine neighborhood.

In 1980, Herman left Paris and moved to the Spanish island of Ibiza, where he remained with his family until 1988. During that time he rediscovered his jazz negatives that had been stored in a box under his bed, and in 1985 released his first book, The Eye of Jazz, published by Hachette/Filipachi Publications. In 1988 he moved to London where he had the first exhibition of his jazz photographs at the Special Photographers Company to great critical acclaim. In the first month, over 10,000 people came to view the exhibit of unseen images. The following year he premiered his first US show, which toured nationally.

After an exhibit in New Orleans in 1991, he fell in love with the city and moved there to immerse himself in its lively jazz and blues scene. He continued to exhibit his work around the world in numerous solo shows. In 1995, Herman released his second book, Jazz Memories, published by Editions Filipacchi, and in that same year was awarded an “Honorary Masters of Science in Photography” from The Brooks Institute of Photography. Other awards received at this time included the "Milt Hinton Award for Excellence in Jazz Photography," from Jazz Photographer's Association, the "Excellence in Photography Award" from the Jazz Journalists Association, and a "Lifetime Achievement Award" from Downbeat Magazine in 2004.

In August 2005, Hurricane Katrina destroyed Herman's home and studio. The storm claimed some 8,000 silver gelatin photographs that had been hand printed by him, a master printer in his own right. As the storm blew in, Herman's crew gathered the negatives and placed them in the care of the Ogden Museum of Southern Art, where they were stored in an upper level vault. Following the devastation of Katrina, Leonard moved to Studio City, California, and re-established his life and business there. In 2006, he released his third book, "Jazz, Giants, And Journeys: The Photography of Herman Leonard", published by Scala Publishers, Ltd. In the forward to the book, Quincy Jones wrote, "When people think of jazz, their mental picture is likely one of Herman's."

Herman's jazz photographs, now collector's items, are a unique record of the jazz scene of the 1940s, 1950s and 1960s. The Smithsonian claims 155 original Herman Leonard photographic prints in its permanent collection, where they are considered as essential to American music history as Benny Goodman's clarinet or Louis Armstrong's horn. Herman's work is also represented in numerous public collections including, Jazz at Lincoln Center, NY, the Ogden Museum of Southern Art, LA, and the George Eastman House, NY, as well as the private collections of Sir Elton John, Bruce Bernard, His Majesty King Bhumibol Adulyadej of Thailand and President Bill Clinton.  The Herman Leonard Jazz Archive was established in 2007 and in 2008 was awarded a GRAMMY® Foundation grant for archiving and preservation. This project was successful in digitally archiving Leonard's vast catalog of over 35,000 negatives, comprising a visual documentation of America's original art form, and preserving it for future generations. Later in 2008, Herman was presented with the coveted Lucie Award for Portraiture from his dear friend Tony Bennett at an awards ceremony at Lincoln Center in NYC. Tony remarked, "He is my favorite artist of any technique, he's a painter with a camera." Herman also appeared on NBC's The Today Show, and in a BBC documentary SAVING JAZZ, which chronicled his experiences following Hurricane Katrina in New Orleans. Leonard returned to his alma mater of Ohio University as the commencement speaker for the graduating class of 2009, and was presented with an Honorary Doctorate.

On August 14, 2010, Herman Leonard passed away, surrounded by his family in Los Angeles, CA at the age of 87. He was celebrated by hundreds of friends and fans with a traditional “second line” jazz funeral through the streets of the New Orleans French Quarter. Throughout his long life, he traveled and lived around the world, capturing images with his distinctive style. Whether he was photographing Miles Davis, Frank Sinatra, Louis Armstrong or a street musician in his home in New Orleans, Herman's smile, warmth and engaging personality continued to open doors for him and his camera; to reveal a world we might have missed. Certainly Herman Leonard's iconic photographs will long be remembered not only for their enduring historic significance, but also for their breathtaking artistic beauty.

Since his passing, his final book project Jazz, was published by Bloomsbury and released in October 2010. In 2012, The GRAMMY® Museum in Los Angeles, CA presented a year-long retrospective, Herman Leonard: Documenting the Giants of Jazz. In 2013, the William J. Clinton Presidential Library in Little Rock, AR honored his work with a major five-month exhibition, Jazz: Through the Eyes of Herman Leonard, which included artifacts of the musicians loaned by many museums and family estates. President Clinton personally recorded a video introduction celebrating “the incomparable Herman Leonard”. The newly opened San Francisco Jazz Center (SFJAZZ) is currently presenting twenty-four mural sized prints of his classic images in a huge outdoor conceptual installation at 201 Franklin Street, in San Francisco, CA.

The Herman Leonard Jazz Archive has an on-going commitment to preserving and sharing these beautiful and historic images for the next generations of jazz fans. 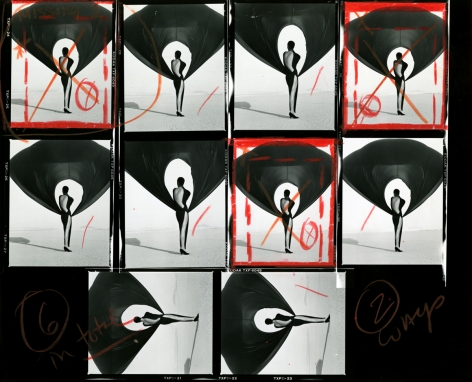 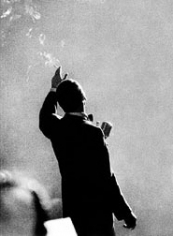 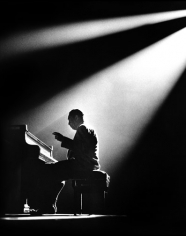 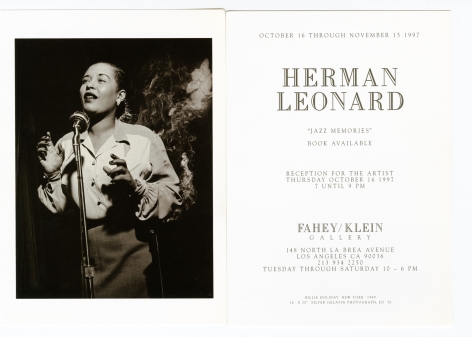