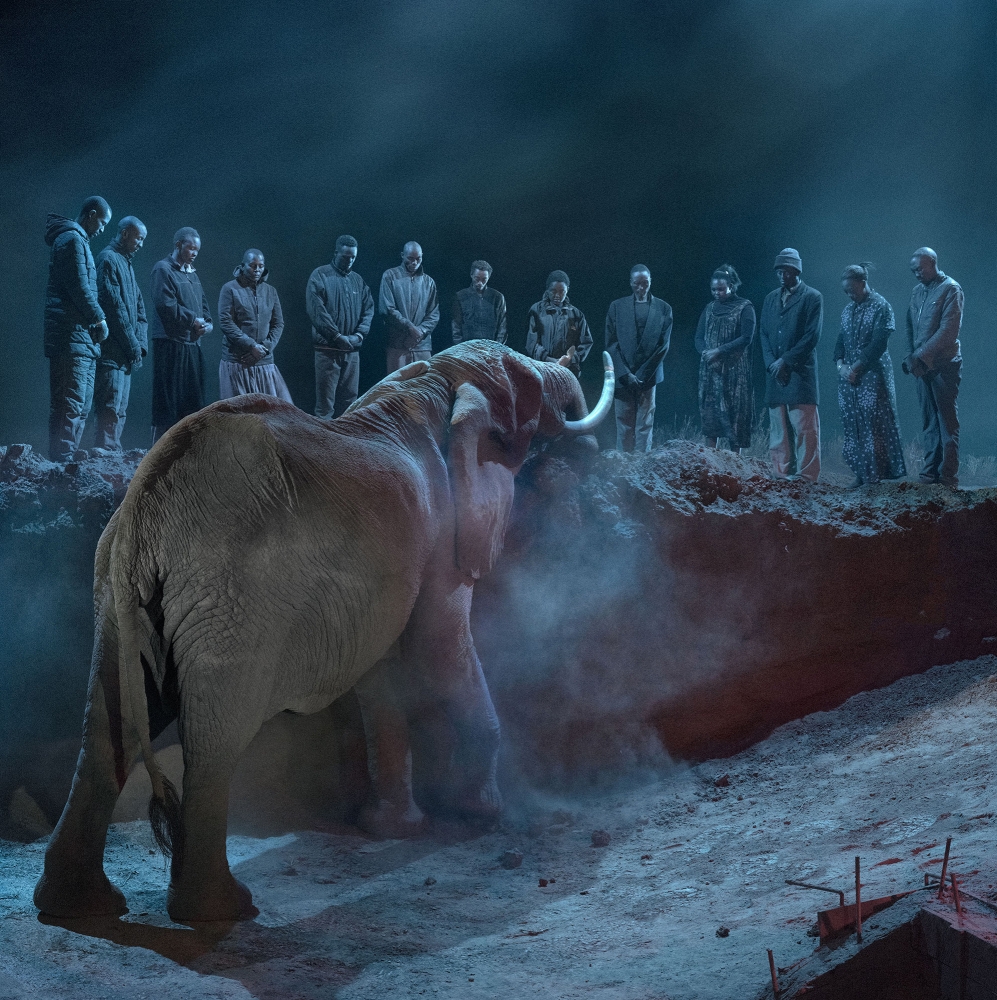 In a new exhibition and publication, acclaimed photographer Nick Brandt continues with what has become his life's work, to document, evocatively depict and labor diligently toward slowing and reversing the degradation of the natural environment and its catastrophic effects on all living things. Though his vision and concerns are global, his birthplace in the U.K. and his primary residence north of Malibu, his heart is in East Africa, among the people and especially the animals who share a common fate at the wilderness-facing edges of industrial development. That's where he's been photographing for almost two decades, and where his activist charity the Big Life Foundation operates.

Brandt's signature is large-scale, 3:1 ratio panoramic landscapes, rendered in rich and majestic black-and-white, depicting, for example, animals such as lions and elephants in detailed settings that portray these denizens of wild places with the encroachments of urbanity. In This Empty World, his new book and current exhibition of the same name at Fahey/Klein Gallery in Los Angeles, Brandt introduces color and complexified settings in a variation on his compound in-camera process. The documentarian and allegorical impulses active in the surreal images made in this way are technical and emotional marvels.

“Someone once called my previous series Inherit the Dust a hybrid of staged and street photography,” Brandt tells the Weekly, “and that's pretty accurate. But the animals are not staged at all. They are and remain wild.” The theatrical look of the photographs is partly because of their large size and rich lighting, but it's also due to the cinematic level of production quality both on location and in the planning and editing studio. Despite the geopolitical and literary power of their content, because Brandt's knack for creating spatial and temporal effects is seamless, believable, impossible and diligently actual, the first thing everyone wants to know is how he makes them.

Each image results from stitching together sets of frames that were originally all made on location and entirely in camera. Brandt collapses timelines but his physical orientations remain consistent; he places locked-down, motion-triggered cameras in remote locations, where sets have been built replicating common sites from the urban environment, such as bridges and gas stations. The set is built and left alone, allowing weeks and sometimes months for the local animal population to get used to it and eventually to wander through, triggering the camera. Once that happens, Brandt's team returns and finishes the detailed settings, staging scenes with human actors and lighting that replicates the circumstances of the first pictures, creating compositions based entirely around the animals' behavior. The finished pictures composite the two source captures — real animals, real people, real places, weeks apart.

This differs from previous series, in which Brandt's process also involved waiting for animals and juxtaposing landscapes across various stages of industrialization. “Through the course of my career, it's been a progression toward staging,” he recounts. “I don't have control over the animals but I am desperate to photograph them before they disappear. I want to create scenes and tell stories and to achieve the decisive moment. But I wanted to work harder for the picture, to not always or not only be waiting.”

Brandt was a painter first, and then a director, and he recalls that the fun was in “the totality of creating, not only finding.” The book contains extensive behind-the-scenes documentation of his entire production process.

“I had to unlearn everything I knew about photographing animals,” Brandt explains. “I hate the word 'nobility,'?” he says yet acknowledges that his previous black-and-white works had an assertive majesty. That series, he says, was one thing, but for this one, he needed extra reality.

If the messages in Inherit the Dust were about how the nobility endures despite our accumulating trash, Brandt says these are more about the pressures that come with ever more intimate interaction. “I wanted to create a sense of anxiety,” Brandt says, though of course without actually upsetting the animals, the better to convey the idea that the people are not only the villains but themselves victims of the same environmental devastation. “Because,” he says, “it always impacts the rural poor first.”

In works such as the “River of People” pieces, a cast of 500 did night shoots for two straight months; and in one the dust storm was very, very real. Most of the people are local, Brandt explains, which means mostly the Maasai community. “But I didn't want too much of a single localized ethnicity, I wanted to reflect people and tribes from all over East Africa.”

There are definitely shades of photographers like Gregory Crewdson and Jeff Wall, whose sweeping cinema-vérité location productions often use amateur actors in designed locations. Brandt is after as much naturalism as possible within the scene, so he leaves participants alone on set until they relax, and their behavior defaults to something more natural. “Real life is superior to what I might have come up with in my imagination,” Brandt says, and even with all his planning, there is room for the true possibility of discovery.

Even more than most artists, Brandt laments the challenges of viewing art online, though he sees it as a necessary evil. But in his case his distaste is about more than scale; it's about the proliferation of small telling details and, even more, the nuances in the facial expressions of the people. Seeing just the basic setup of the piece, it's not immediately clear that the people are not the aggressors, which might give the wrong impression of the story. “When you can see the faces,” he says, “you understand the level of empathy and connection between animals and people, a shared sense of loss and melancholy.” For example, in Bridge Construction WIth Elephants and Workers at Night, which shows two elephants and eight men, one man appears to be looking at the elephant, which appears to return his gaze. Even knowing it's an illusion doesn't dampen the shiver of recognition, but this pivotal detail is all but impossible to access at a small scale.

The introduction of color to this series represents the first time Brandt has worked in an expanded palette, which had him feeling both “excited and frightened.” But it's effective, as he says, “to express the reality of the animals' situation. Bathed in unnatural lights, you really see that they don't belong there. It needs to look this way.” Color is also a feature of this series' prevalence of night shots, which came about simply because the animals venture out at night and then the people had to match that. A certain degree of naturalism, remember, is a prerequisite of this kind of surrealism. It's similar to Brandt's imperative as an artist to build on location, often on land that has been developed only recently and was once, not long ago, their habitat.

“I spent four months waiting for a lioness to walk through the rubble,” Brandt says of his Bus Station, a work made with motion sensors and a flash. The Gathering, which sees an elephant resting its head on the rim of a trench and a circle of men looking down from above with bowed heads, blew Brandt's mind. “Why did the elephant lean its head on the edge of the trench like that? It's extraordinary!” he marvels.

In 2010, Brandt co-founded Big Life Foundation with noted environmentalist Richard Bonham. It's a nonprofit organization protecting 1.6 million acres of ecosystem in East Africa, and achieving dramatic reductions in poaching in the area. “All animals, like in the pictures, they coexist with the local population,” Brandt says. “They are still alive because the Maasai understand the long-term economic benefit of protecting them. The foundation's 300 people make us the biggest employer in the region, with 40 outposts, rangers, mobiles, dogs. … In 2010 the violence was rampant; in 2018 they killed just one single elephant. It's one of the only areas where elephant and lion populations are increasing.

“Around 2008,” Brandt explains, “the killing and poaching started again suddenly; by 2010 the animals had learned to fear people again. The foundation exists to address the situation. I consider myself a pessimistic idealist. I have a dark, black vision of our current direction but at the same time I believe it's absolutely, completely worthwhile to try to mitigate the damage. Big Life Foundation battles against what you see in these photos.”

While Brandt's images do not depict poaching per se, the threat of overpopulation and rampant development contributes to the economic pressures that give rise to it. In Brandt's vision, both animals and the rural poor will be the losers in that scenario, but that symbiosis could go in either direction. “Whatever happens,” he says, “it will happen to everyone. People have an opportunity to develop without destroying, sustainably. Environmentalism can be an economic goldmine. We have to transcend poetry and get to pragmatism.” Brandt likens the conversation to that surrounding renewable energy here in the United States. “It's not sexy,” he says, “but fuck it, we have to do whatever it takes.”

His next project, expected in 2022, addresses climate change in America.